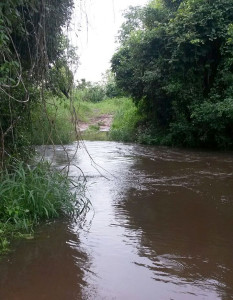 Update on the Anti Poaching in Coutada 11 – Mozambique

The rains have finally arrived.

The concession has been getting a lot of rain in the past week. All the pans are full and the rivers are bursting their banks.

The Anti Poaching units have been working in an area called Nyaboswe for the past week, they managed to catch 1 poacher while the second one ran away. They had on them 20 Suni, and 38 pieces of smoked Nyala meat. The handcuffed poacher decided to do a runner during the night and got away.

The following day Criag went to the local police station at Nensa, and together they managed to find both the culprits, who have now been arrested.

Yesterday the unit worked on the area close to the Mungari River near camp. This river runs from the swamps, past camps and through to Coutada 12.

They managed to find 46 big snares, one of which had an Nyala bull in it. Craig and his team set up a trial cam on one of the paths and the today and managed to arrest 3 poachers.

Tomorrow the units will be working in an area known as Dongo. We will keep you posted on their success.